A Snapshot Into The Past Of Colombia's Capital City 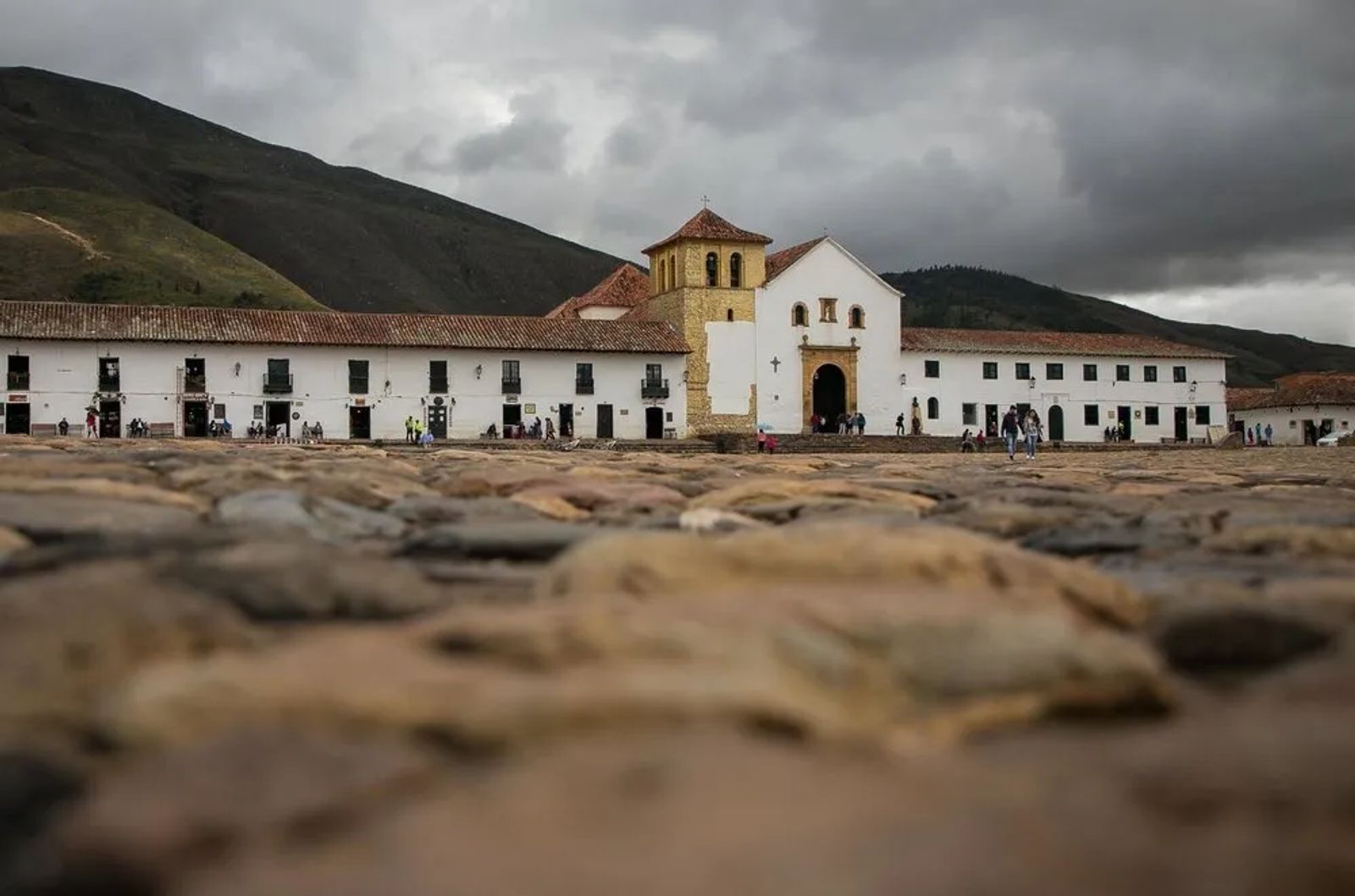 Colombia and it's capital city, Bogota, have complex histories which still to this day can spark politically charged discussions amongst residents. From political and social groups trying to rise and take control of power, guerilla and paramilitary movements, and a dark history with narcotrafficking, the country is making a concerted effort to shed the dark portions of its history while retaining the positive attributes and building for the future.

Bogota sits within the Andes mountain range, and at 2,640m (8,661') above sea-level causing it to be exposed to the continually changing. To the east of Bogota, the mountains run north and south. If you are ever lost on a city street and need to re-calibrate, just walk to a street where you can see the mountains and you will be able to have your bearings again. Resting atop the mountain next to the city is a church called Monserrate. Those wanting to attend the church on Sundays, or see the sights during the week can take a cable car or hike up the stony pathway of the mountain and past shanty homes and shops trying to make a living along the path. At the top, the expansive city views show just how large the city has grown over the years. As the hike starts at elevation and adds another 500m (~1500'), I can feel the weight of my legs increase and my lungs work harder as I took each new step towards the top. My new friends and I were welcomed by an early teenage group of school kids wanting to speak what little English they were learning in school. After many broken English and Spanish discussions and countless pictures with us, we were able to take in the city from the new vantage point and understand the scale of the city.

The central district of Bogota, known as La Candelaria, contains many of the historic government buildings, homes, and churches. As you travel further away from the center of the city, you will see the modern development that has occurred as the city has come into its own. There are many tours offered around Bogota to help understand the history. I have been a bit spoiled as I have a new local friend who was gracious enough to take time to help me learn about the city and the intricate history of Colombia. As I stood in the middle of the pigeon-filled Simon Bolivar Plaza surrounded by churches and government buildings from the beginning of Colombia, I was able to see the past come alive. As my friend narrated, I could almost visually recall the historic fight that broke out within the corner of the plaza pictured below, which was ultimately the catalyst of the Colombian independence movement from Spain. I also could imagine the tanks rolling across the square as the nation was distracted by some futbol games to crash through the Judicial building and end a hostage situation, killing many of the hostages and captors, where the markets once stood in front of me, and other historical stories. 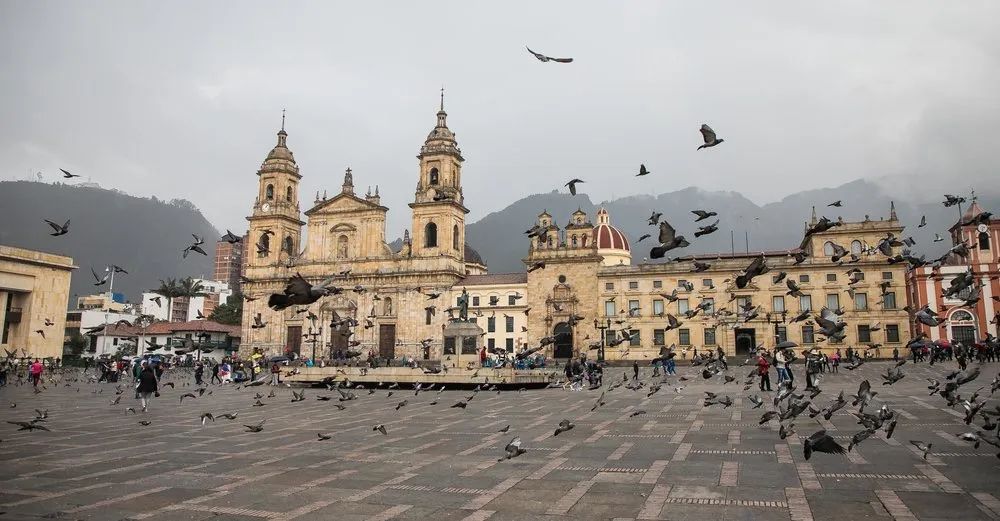 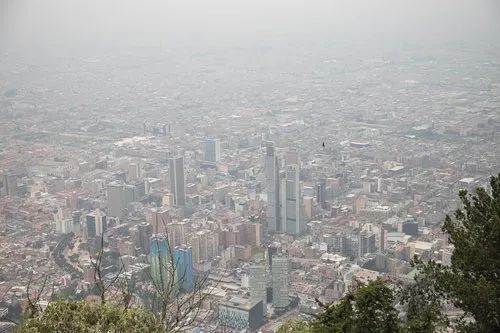 Views from atop Bogota and in La Candeleria, a similar Plaza as Villa De Leyva from history, but now evolved.

After being able to spend a few days in the city, my new friends and I grabbed a car and headed north for Villa de Leyva. Villa de Leyva is north of Bogota 3-4 hours depending on traffic, and is a colonial city that looks as it has been lost in time. With its 1700’s era Spanish architecture, the white walls of the stone buildings channel pedestrians and autos down the streets paved with stones. While walking throughout the village, something quickly stood out - a noticeable amount of people wearing a more traditional Colombian dress including a Ruana (similar to a poncho) and woven/cowboy hats. At first I made the shallow assumption that these are mostly worn by tourists, but as I observed the people in the city I started to see this was more something held onto from their heritage and is still a functional garment today. Once my eyes were opened to this, I watched locals riding their motorcycles around the countryside with their Ruanas, old men and women sitting on bench outside a shop visiting with their friends as they may have for countless years, and on Sunday entire families wore the garb as they walked to fill the old, yet ornate churches around the city. As this was not something that is staged, I found myself for moments being able to feel what it was like to live here over one hundred years ago. With little development in the last hundreds of years, it was easy to imagine horses pulling wagons over the bumpy stones, local soldiers filling the streets as they prepare to fight for their independence, and whatever else the imagination can prepare. The city is nestled into a mountain just as is Bogota, and it looks as the capital city did hundreds of years ago. It was special to be able to experience both, as I can see how it is almost a firsthand view of the "before and after" of a small colonial Spanish-influenced village to a busy and vibrant Colombian city. Knowing what Bogota is now along with its tumultuous history, you could see a more innocent, small, and pure version before the city grew.

I have enrolled in two weeks of Spanish lessons to kick start my ability to speak the native tongue of the countries I will visit over the next several months. In addition to always wanting to learn another language, I will also be able to absorb more of the cultures of Latin America. The more I am able to learn the more I am able to share with you. Bogota, and the greater Colombia, is a great location to learn as there are not as many English speakers as you will find in other parts of the world. This hasn't been easy; just as I thought I was getting good at some basic language skills I continue to be quickly humbled. Earlier this week I tried to navigate an error with my gym membership, and after stumbling through 15 minutes of what might have been the most horrible Spanish mumbled, I apologetically muttered that I would return the following day to the gracious and patient employee and went home to get back to the basics.

Learning a new language reminds me how nuanced English is as well. As I get frustrated when I learn there are many different words for the same object, depending on the country or region of a country, I begin to realize we do much of the same ourselves with the English language within the same country and especially from different English speaking countries. I have a renewed appreciation for anyone who can speak broken English, and hope I can soon speak broken Spanish enough to be confident enough to navigate around and continue to improve. I find language interesting as in addition to cities and people, it too has evolved over time. Each language, dialect, regional vocabulary have become what they are today based on a series of events historical events. For me it's important to understand the path of evolution in addition to the end result, as most everyone, everything and every place has a story that all make us who we are today.