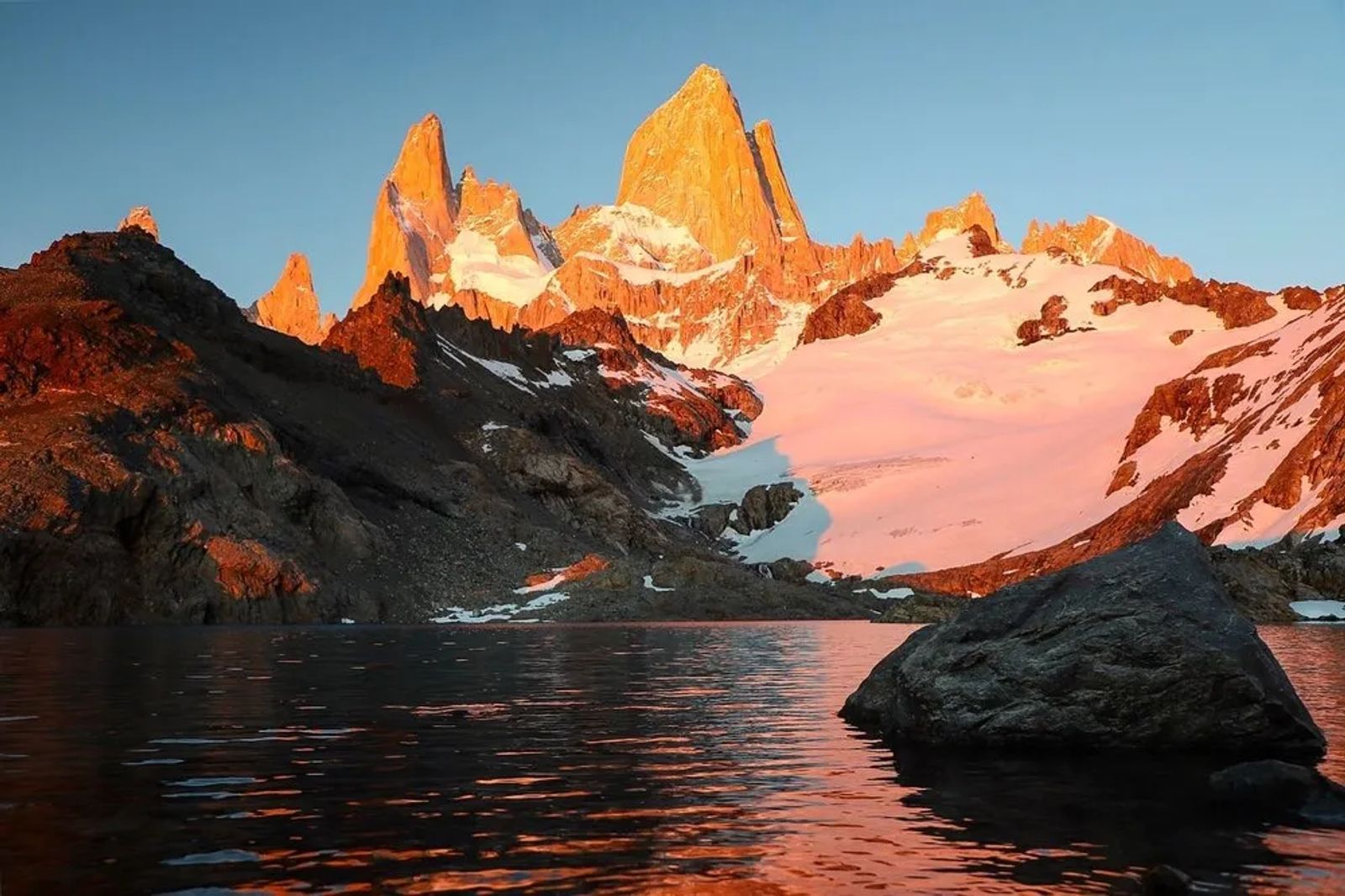 As the flight descended into El Calafate, I peered out the window and witnessed southern Patagonia from 20,000 feet above the earth. With my head in pain a bit from the previous night's revelry in Buenos Aires, I was instantly awaken and fully alert to the view in front of me. Two massive lakes were glowing a turquoise color, and in the distance I could see the peaks of the mountains and at once I spotted it, Fitz Roy. "That's where we are going, I am here." I thought to myself with increasing excitement. Feeling suddenly overwhelmed, as the only loose plan that I had upon leaving my career behind was to "travel to Patagonia" with nothing more than heading in the general direction…south. As the migration began in the months prior, I have finally arrived at my destination - and with how beautiful the landscape was when I arrived, it was surreal.

After scouring the small city of El Calafate for a tent and sleeping bag for rent (required for the minimalist backpacker), I was aboard a bus with a compatriot, who happened to align travel plans so we could explore the mountains well, to the town of El Chalten. El Chalten is a small village with 350 permanent residents nestled next to at the base of Cerro Torre and Cerro Fitz Roy. As the bus crossed the desert landscape for several hours, we eventually turned course and started driving directly towards a beautiful horizon filled we with mountains. The snow-capped mountains are so grand that it felt as if we were suspended in time only to watch their magnitude slowly grow before our eyes over the course of 30 minutes.

Upon arrival and after a nights rest, with our packs loaded down with four days' worth of gear and supplies for the mountain, we crossed town and set foot on the trail. Climbing immediately out of town, the trail leads directly up the interior of a forested hillside to evacuate into a grassy clearing that overlooks an expansive river valley. As your eyes trace the hillside along the river, it is easy to see where the glaciers scraped the shape into each face as if it was a set of claws. There are times that I travel to a new place and it reminds me another place I have visited. As I hiked further and further into the hills and mountains of Patagonia I quickly determined that this place is unlike any I've been to. I began to think of what other place this resembles. Some sections of trail seemed like Africa, the Pacific Northwest, or a dense Eastern European forest, or Alaskan ice field; collectively the environment woven together into a single area represent a place unique and one I've never encountered. My mind kept returning to, "This is Patagonia, I am here." 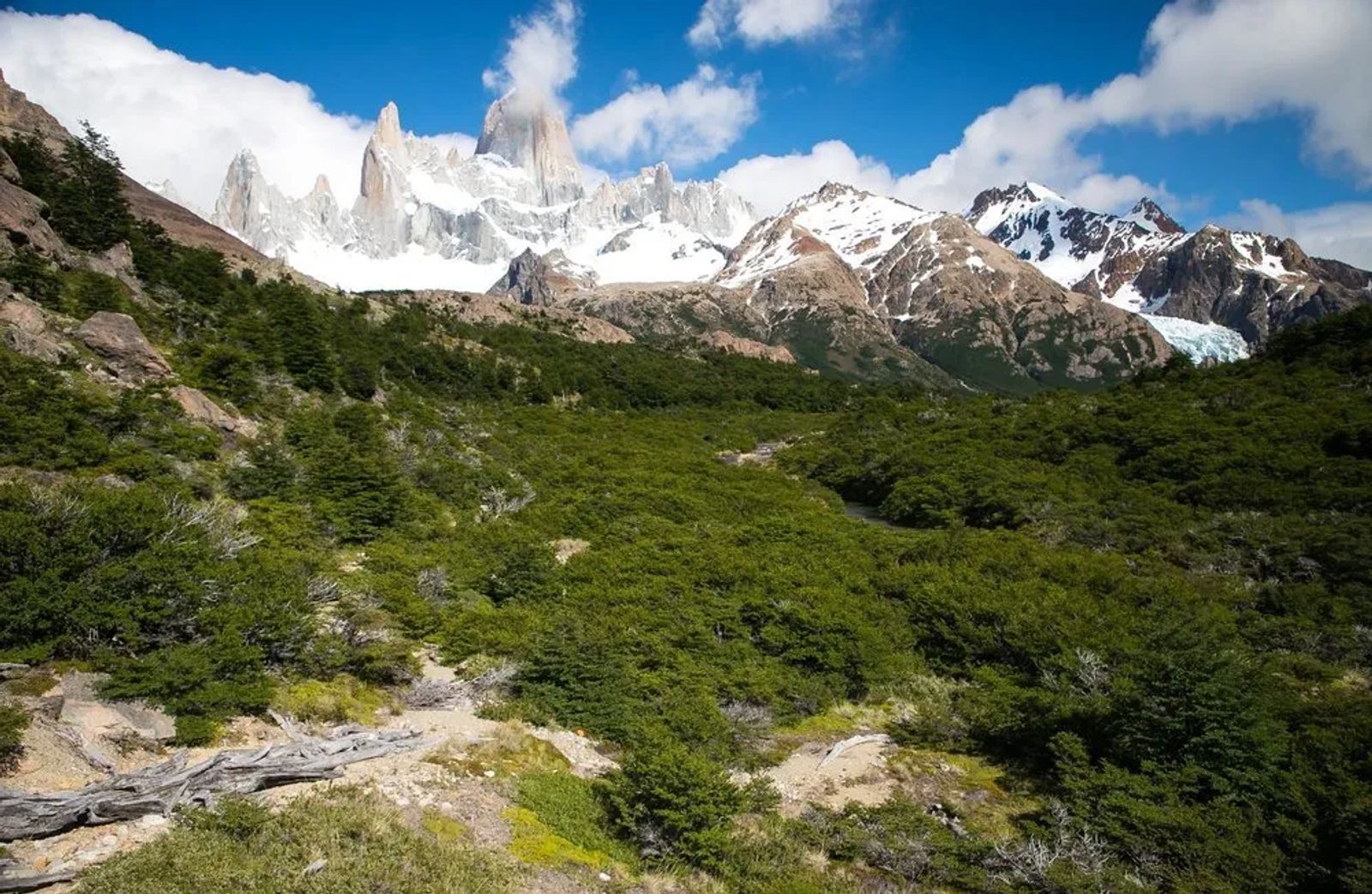 After crossing many halved logs used to be a bridge over the many ice cold, stone-colored, glacial runoff streams, we closed in on our destination. After rounding a corner I was snapped out of my marching trance by hearing Jesse utter, "Look at that". We arrived at a clearing and beyond stood the very peaks we sought after, standing at full attention as if they were waiting for us. We were fortunate to have clear weather in the morning to see the entire skyline, with an ice field cradled between two distant mountains to the right. "Holy shit, this is unbelievable." escaped my lips as if it was the most eloquent thing I could say, trying to take in what was before me. I have followed and studied Mother Nature's masterpiece collection of art over the years, and this was a new one I was working hard to digest.

After reaching camp and setting up our temporary home, our excitement could not wait until the next day at sunrise to climb the remaining two kilometers, and further up the mountain we went. With each step further up the mountain, the muscles in my legs reminded me of the morning's hike and current elevation change, and felt heavier than they did in the morning. The hike wasn't incredibly difficult, but it also wasn't easy based on the heavy heart beat and deep, sharp breathes taken. The majority of the elevation gain came in the last kilometer, and the short distance felt further from the anticipation of almost being there.

Finally we crested the final climb to a ridgeline and before us laid the glowing emerald waters of Laguna de los Tres surrounded by enormous granite mountains looming over it. Multiple peaks stood so close together, they appeared as if they were the defense wall of a castle surrounding the main turret of Fitz Roy. Along with other hikers, we took in what we before us when suddenly the winds picked up and the rain started to blow in. The intensity increased rapidly, and as anyone who has spent time in the mountains knows how unpredictable and ferocious a mountain storm can be, we decided to descend quickly to return the next morning. As we scurried down the loose gravel, there were moments the wind blew so hard that I was physically stopped in my tracks, and at times pushed backwards up the mountain.

Early the next morning as we left camp, a few lights bobbled up the mountain ahead of us on the heads of fellow hikers, and as we climbed in elevation we were able to see many more behind us. As we climbed west, the sun rose began to warm the horizon behind us and soon enough to turn off our lights and use the dawn to guide our way. Upon reaching the ridgeline again, we quickly found our seats for the show that was about to begin and made some cheap instant coffee with the paraphernalia we carried along. After a short wait, the show began. The tips of the peaks came alive with a light orange, soon the color pouring down the entire face of granite before the entire peak returned to a dull gray. As the previous day the waters of the lagoon were emerald, they now changed from a cold nighttime gray to a bright orange from the reflection off the peaks, and eventually changing to a vibrant blue. Throughout the show we stood in a shadow cast from the small hill created by the ridge line behind us, and it was as if we witnessed one of the greatest natural light shows with the light glowing off our face changing along with the water and the mountains. Just as it seemed the show was over, an encore show of one more color change took place on the jagged peaks with a burst of golden yellow from the sun passing through a layer of clouds.

I felt a strong sense of gratitude for being able to witness such a spectacle, and appreciation to share it with a friend, but there were also moments of a small sense of loneliness as it would be an incredible experience to add to a bond with a partner. I have stated before this is a tradeoff in the life of travel before, and one that I have accepted for now. This is not stated to seek pity, but rather to be more transparent in the human experience on the path I have found myself on so others can decide if it is a life for them.

I don't think I will ever be able to forget what I witnessed that morning, nor I hope I never lose appreciation for the series of events that led to the moment. It is so easy to be caught up in a life of instant gratification and wanting everything to happen immediately - but what nature has taught me is that some things in life cannot be rushed and in the end it will all work out just the way it is supposed to. As I will remain in Patagonia over the next month, I know I will never have time to explore it's beauty in totality on this trip or even many trips, but can be patient and appreciate what I am able to experience in the time I am given in this beautiful place. 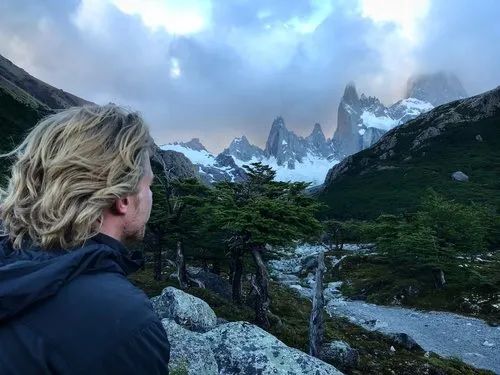