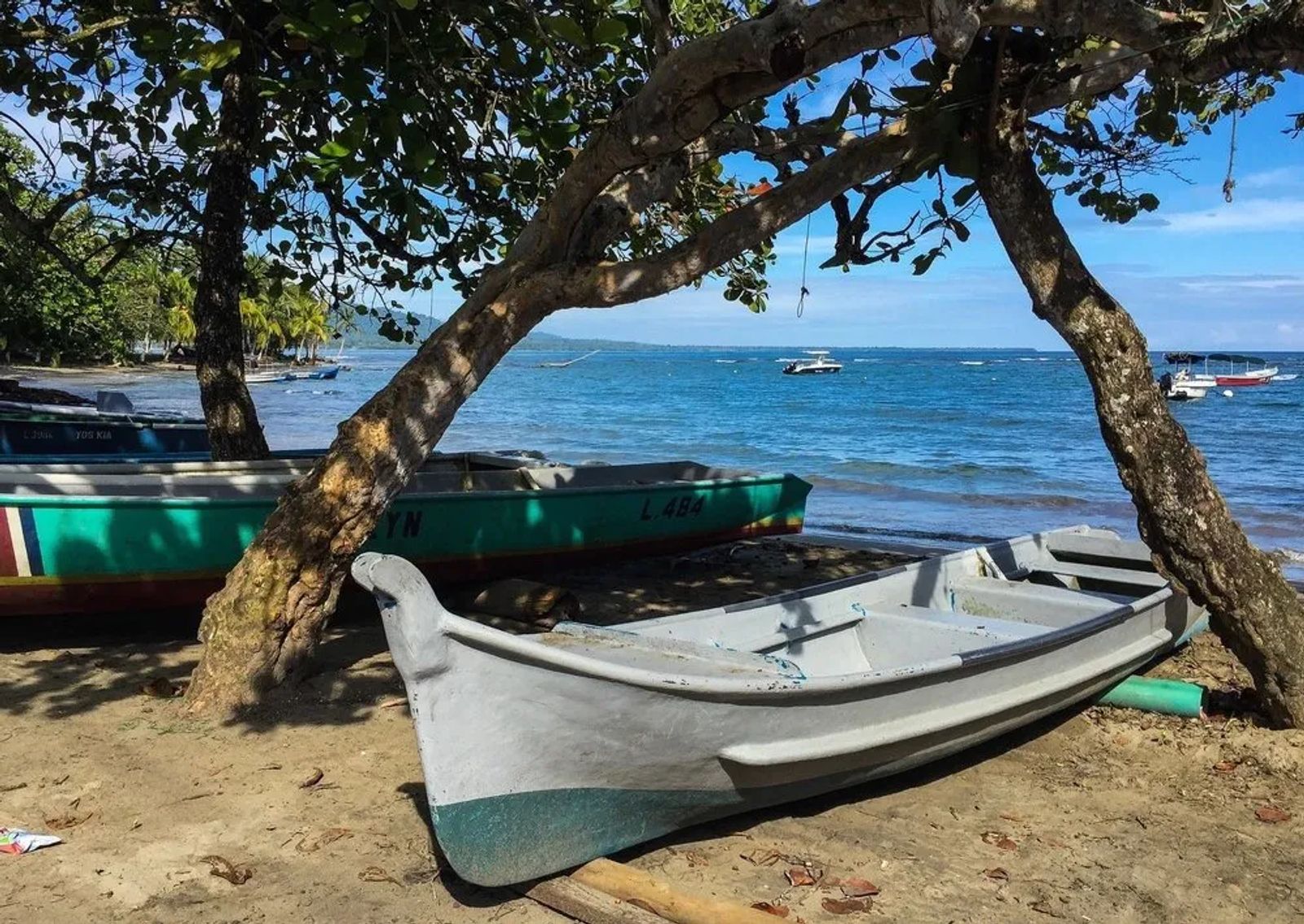 After taking nearly 10 hours of buses across the country, I was able to spend the past couple days on the Caribbean side of the Costa Rica in Puerto Viejo (PV). The Caribbean coast of the country has a heavy afro-Caribbean influence in addition to the traditional Spanish influence. As you walk through the sparsely paved streets of the village, you will hear the continual distant sounds of reggae drums and Bob Marley songs escaping from storefronts and passing cars. There are noticeably more Spanish-speaking Rastas walking the streets and dreadlocks blend in as if a common color of paint. As this was one of my favorite spots in the country from my first trip months ago, I had a romantic notion to return to this backpacker oasis and was enthused when a friend asked me if I would like to join him and his friends. There is a relaxed vibe throughout the town and it stretches along the beach, and you almost never run out of postcard views of the water with a rope swing hanging from a tree, or a skiff beached, ready for its next journey out into the water. As with the rest of the country, the stray dogs accompany you for a walk and this morning I even had three horses finding their way through town alone. The village is also not far from the Panamanian border. I found this out during my last visit with friends as we drove and hiked across a few rivers during an do-it-yourself (DIY) expedition to a waterfall and ended up realizing we were well into another country before turning around and back-tracking most of the hike to realize how close it was from where we parked our car.

My friend who I met and his fiancé serve in the Peace Corp on a small remote island call Isla de Chira. It puts a lot into perspective when you hear about their daily lives of having to spend an hour each day chasing the insects and critters out of their home and a multiple-hour journey with groceries to re-stock their cupboards. This is a real spin on the romantic notion of settling on a remote Central American island. Our group spent the days soaking in the surf, sand and sun of the beaches of the Caribbean. The jungle creeps right up to the ocean, only broken by stretches of quiet sandy beaches. As the sun heats up the sand to an almost unbearable temperature, you skip your way across the beach trying to avoid burning the skin on the bottom of your feet until suddenly you find the cool, wet sand that has been blanketed by waves.

What is it about playing in the waves that brings humans so much joy? Is it the feeling of a split second of being gravity-free or the risk of the unknown? Perhaps it’s a deep psychological feeling of youth being recalled as the waves throws the body around and respecting something more powerful than us. As much as I enjoyed the beach and spending time with good company, it also made me realize how I am ready again to make an impact in the world with something greater than myself, and not just spend my time being relaxed. I believe that being able to re-charge is critical to being effective, and my batteries are now full. Humans, by nature, are like any other species that will most likely choose the path of least resistance if given the choice, and I definitely need to ensure I am not just being comfortable.

As I now head back into the interior of the country, the bus has turned to climb through the lush, mountainous jungle. We have passed countless cloudy emerald rivers, with their runoff coming from higher elevation and working their way under the thick canopy until they find the ocean. In between each passing river are a collection of cities and industrial zones. I have always found construction of buildings interesting in places I travel, and think about what the primary drivers are behind why things are the way they are. A good proportion of the buildings in greater Costa Rica are open to the outside, and it is not uncommon to see kitchens and other common spaces of a home under a canopy/roof, and not closed in by four walls. The air is whisking into the cabin from our open windows and cools down as we climb in elevation. Though it is now mixed with fumes of diesel as the semi-trucks in front of us work diligently to pull their cargo over the summit, it is still enjoyable after I've embrace the constant heat and sweat that has enveloped my body since landing here a week ago.

I have found that travel days can be both the most exciting and the most lonely days on a solo walkabout. I am excited for what is in front of me, keeping my eyes on the landscape and being in awe with new places, thinking about what I'm going to learn in the next place. At the same time I am leaving behind the only semblance of a normal routine I have created in my life, as slight as it may be. When in a location for even a few days, travelers are able to develop a small routine and potentially make friends with a few in the area. Once it comes time to travel, it is time to leave it all behind once again. It's not an overwhelming feeling for me, but it definitely does become present for every new step into the unknown and shouldn't be discounted when picking the lifestyle of living out of a backpack.

In the week I've been here, I've been able to learn so many other stories from fellow travelers, all coming from a different backgrounds and geographies. I have taken away something from each one of them, whether a Brit on a multiple month walkabout around the globe, a new traveler recently bit by the travel bug and changing their life course to explore more of this, to a recovered drug addict who has literally died a couple times before finding recovery and now on a mission to save others. I hope to write more about their stories in future posts.

I have no solid plans for the next few days in the country, though there are many places on my list of options. Come along for the ride, let me know if you want to see more jungle, city, or volcanoes before I leave the country and I will see what I can do to share with you.